The Light At The End Of The Tunnel

Finally, I have finished the twelve short stories that will pad out the paperback edition of Swan Song.

It's been a long time coming and I must admit, those last three stories damn near killed me!

There's truly no such thing as an easy slam dunk! Especially if your quality meter is as high as mine!

They are finished, that's the point, and I am very proud of them!

It will be so cool to have people finish reading Swan Song and then just over the page, have twelve new 'experiences' waiting for them! I think that's pretty cool. 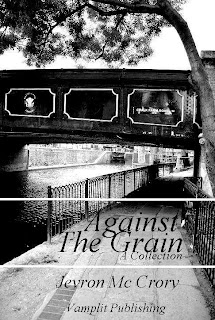 of those stories will be available as an exclusive FREE ebook collection entitled Against The Grain.

The other six will remain EXCLUSIVE to the Swan Song paperback and, again, I think that's pretty cool.

The stories range in themes, as I have previously discussed here in other posts, yet I hope I have shown my heart in all of them.

There's violence but redemption, love but loss, humour but deadly serious threat and it's all been tied together with one simple premise; the mythic obsession we have with the creature of the vampire.

I promised my publisher a long time ago I would stay true to what I hope is my unique calling card, the London setting for my tales. I am glad to say that except for one story, London played a welcome and fitting host for my stories. At no time did I feel I really had to change locale. It links me to the town I live in all the more succintly and my debut novella.

(Even my front cover for this collection, taken in Camden Town, is the bridge Lewis Morrison finds himself under during the storm when he finally accepts Katrina for what she is in Swan Song. I like this oh so subtle reference).

So now it's all gone off to my darling publisher, and we play the waiting game.....

What does the immediate future hold?

Well, interestingly enough, as mentioned before, I have THREE potentials vying for my affections to be my next REAL book.

It's going to be fun letting them fight to the death!

To the victor, the spoils!
Posted by Jevron McCrory at 07:31

She doesn’t grant interviews. She doesn’t pander to the press. No one has ever seen her outside of her musical arena.

He despises music. He loathes musicians. No one can stand to be in his company for more than a few moments.

Katrina and Lewis are damaged.

In the seedy underbelly of Camden, a unique North London habitat, they will find each other and their discovery will bring hope, redemption, pain, pleasure...

This is Swan Song.

Reviews of My Novel Swan Song